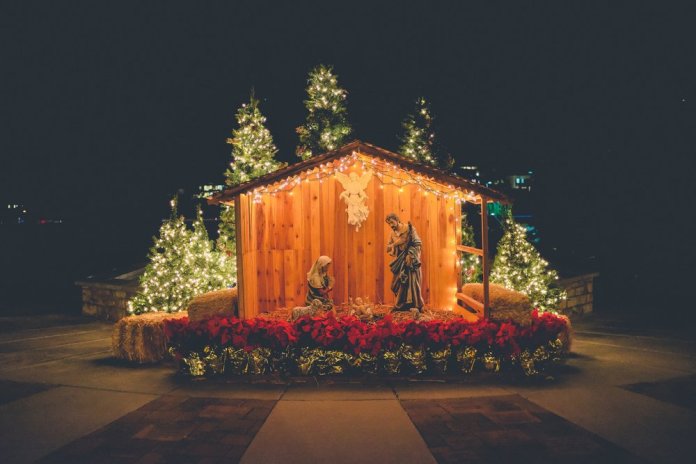 We’re in a busy stretch.

It’s a time for Christmas parties, out-of-town guests, gift giving, and non-stop holiday music. With just over a week remaining until the 25th, we can easily see symptoms of the season everywhere we turn.

If you’re like me, you love it all. What’s not to love about the most wonderful time of the year? But as Becky Kiser reminded us on this month’s podcast, if we’re not careful–we can find ourselves swept up into the hustle of December without experiencing a sacred holiday. Without intentionally stepping back from the craziness, we’ll blink and it will be the middle of January.

I’ve been going through an Advent study with a friend, and one of the most notable realities of the Christmas origin is just how upside-down it is.

An angel finds an unsuspecting and everyday woman and tells her she’ll birth God’s Son. As a virgin, she’s presumably fearful when she tells her fiance about the pregnancy. Joseph, upon hearing the news, plans to quietly call the wedding off until another angel tells him to stick it out with Mary, become her husband, and parent the child. When it’s time to give birth, the couple can’t find space in a hotel as they travel–so Mary ends up giving birth to Jesus in some unknown place (historians think it was a barn or cave) and puts the King of the world in a box usually used to feed animals.

Before Mary got word of the medical miracle about to take place in her womb, the world waited hundreds of years in silence for some sign of God’s Son on earth. Instead of coming as a military leader or scepter-wielding royal ruler, Jesus entered the world as a carpenter spending the first three decades of his life as an entrepreneur who would eventually have “no place to lay his head.”

Thousands of years later, we’re still celebrating this moment in history. It’s a stretch to say “Grandma Got Run Over By A Reindeer” is commemorating the birth of our Savior, but the season is intended to draw us back to the reality of the Baby in the manger.

The humble and magnificent entry of Jesus does more than simply shock and awe us. It also teaches us about what productivity in our lives means, especially as we try to define the word a different way–different than a common definition of scrambling around as fast as we can to get as much as we can done.

Here are a several ways Advent can shape our definition and application of productivity.

If God would send His son to be born among animals, we can safely assume He has little care for the trophies and status symbols we often make top priority.

Doing the right things the right way for the right reasons often results in greater influence and power, but not always.

The chief goal of a productive life isn’t to climb a ladder or gain visibility.

A productive life is defined by doing important and impactful things out of obedience to Christ and out of love for one another.

Sometimes these things come with acclaim. Sometimes they don’t. But acclaim isn’t what matters.

Patience is a virtue

The world waited for a Messiah and many people eventually missed Him when He arrived. It can be challenging to wait.

Go-getters want to go and get right now. But contrary to a traditional understanding of productivity, the spaces intended for patience are to be valued and cherished.

Waiting, when not done from a place of laziness or sloth, is important. It grates against our desire to always be getting things done, but it points to a different reality of the Kingdom.

One day, Mary is an average person. After a single encounter with an angel, she’s a pregnant virgin anticipating the crazy reality that she’ll give birth to God’s Son.

God is in the business of asking unsuspecting people to go and do things that seem wild to everyone else. Often, these things also seem impossible.

Making progress on meaningful things will often come with people questioning whether the things you’re doing are possible or within your realm of ability.

On our own, we don’t have what it takes. With God, however, all things are possible.

Joseph and Mary signed up for second glances and judgmental stares when they agreed to stay together through Mary’s pregnancy.

How many people do you think actually believed God put a baby in Mary’s womb and it wasn’t a result of premarital sex?

We must do what’s right, even when it isn’t easy or popular.

The Magi followed a star to find Jesus and brought him nice gifts. They went to visit Jesus in order to worship Him.

This journey wasn’t a misstep or detour. It was important. In fact, it was the most important thing they could do.

Doing, doing, doing can lead us to view worship, time reading the Bible, and intentional prayer as just another thing to do–a box we check in the morning before we get on with what really needs to be done.

As the Magi show us, the ultimate goal is to follow the Bethlehem Star and go to the places God is leading us. The only way we can keep our eye on the prize is to remember our admiration of Jesus is the ultimate motivation in all things.

We have joy for the journey

Going out and doing meaningful things isn’t fueled by obligation or guilt. When it is, we’re destined for burnout and pride.

When the Magi get to Jesus, it says they were “overwhelmed with joy.”

A task list can be viewed many ways, but when we’re ultimately doing things out of the freedom we have in Christ–we find ourselves fueled with joy rather than strapped with the weight of what lies before us.

May you and the people you love be refreshed by the upside down nature of Christmas. And may we all be overwhelmed with joy.

Photo by NeONBRAND on Unsplash